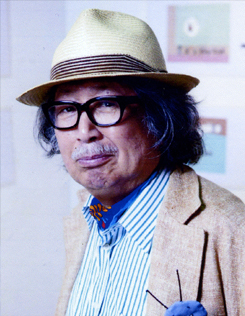 What is Animation? What is Animation?
In the 1960s, when ‘manga film’ was the only term for animated imagery in Japan, the Animation Group of Three (Hiroshi Manabe, Ryohei Yanagihara, and myself) was established and many animation screenings were held. This initiative drew great attention, bringing together various creatives active on the front lines at that time, including many cartoonists, artist painters, illustrators, photographers, and sculptors.

What is the attraction of animation?
After the time of ‘manga film’, people started to realize that everything could be animated, and interest toward animation began to spread. At the time when the Japanese animation industry was not yet exchanging internationally, my work Human Zoo was awarded a Special Jury Prize at the Annecy International Animation Festival, the first for a Japanese animation, which led to the Annecy Festival becoming more widely known in Japan. Since then, many Japanese animators have taken part in film festivals abroad. We longed so much for the realization of an animation festival in Japan.
In 1985, the then-Mayor of Hiroshima, who was dedicated to international cultural projects, was persuaded by Renzo and Sayoko Kinoshita to organize the first Hiroshima International Animation Festival. Of course, I also participated in the festival and showed my work 11PM to the mayor, asking for their further understanding.
From the very first, to this year’s seventeenth Hiroshima International Animation Festival, it has seen great success and growth, having been highly recognized internationally. I truly hope that this festival continues for a long time to come.